We, the undersigned, call for an immediate end to the solitary confinement of Kurdish leader Abdullah Öcalan and other political prisoners in Turkey who are being held in gross violation of their human rights and of the norms of the internationally agreed-upon Mandela Rules. 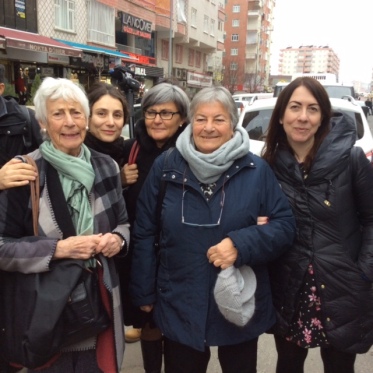 Any form of isolation, also known as “solitary confinement”, is strictly prohibited under United Nations Minimum Rules of the Treatment of Prisoners (Mandela Rules) adopted by the UN in May 2015. According to these rules, 22 hours or more a day without human contact for a time period in excess of 15 consecutive days is deemed prolonged solitary confinement.

The prolonged isolation of Abdullah Öcalan on İmralı island prison, since his abduction in 1999, has continued for 20 years. The absolute isolation enforced on Abdullah Öcalan in İmralı island prison has entered its third year with no news from him. Meanwhile, since the abandonment of the Kurdish-Turkish peace initiative in 2015, Turkey has intensified its military war and political repression of the Kurds. The suppression of political parties and the jailing of Kurdish political leaders has become the norm as Turkish democracy has descended into authoritarian rule.

Leyla Güven, an imprisoned woman who is a Member of Parliament from the Peoples’ Democratic Party, or HDP, started a hunger strike against Öcalan’s isolation more than 65 days ago. Since then, more than 150 prisoners have joined her on hunger strikes in solidarity. Meanwhile, 14 Kurdish politicians continue their hunger strike in the city of Strasbourg, France.

The number of people in Turkey’s prisons has now reached 260,000. Human rights organizations are reporting that human rights violations against prisoners are increasing. Isolation (solitary confinement) is one of the most severe of these violations.

The hunger strikes currently underway in Turkey by more than 150 people, are causing grave damage to the health of those undertaking the protests. We, the undersigned, are part of a growing mass solidarity movement that is calling for an end to the injustice of isolation.

As a matter of human dignity and human rights, we call for an immediate end to the isolation imposed on Abdullah Öcalan and all political prisoners incarcerated in Turkey so that these hunger strikes can end. We call on the international community to insist that Turkey abide by the Mandela Rules and take urgent action to enforce them.

Campaign for a political solution of the Kurdish Question – Email: estella24@tiscali.co.uk