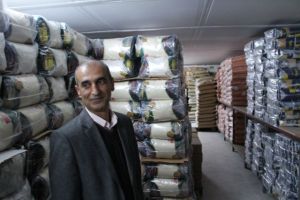 Serif stands among the produce on offer

The violent repression of the Kurdish people is well documented. But arriving in Diyarbakir as part of a delegation from the UK, the first thing that strikes me is the poverty that is clearly visible on the streets. This is not a rich city; this is not a wealthy region. The sky scrapers and high-end restaurants of Istanbul are a long way away. But with the Turkish Government unwilling to step in to help, and indeed promoting policies to keep the Kurdish regions underdeveloped, people here are having to take the situation into their own hands.

A study by the Union of SouthEast Anatolian Region Municipalities (GABB) shows the South Eastern provinces making up the lowest 21 ranks out of Turkey’s 81 provinces in nearly all socio-economic indicators. In spite of the region’s 16% share of the population and underdevelopment, it only receives 8.5% of the local administration spending, and attracts hardly any investment for major infrastructure projects.

Şerif Camci General Secretary of charity, Sarmaşık – literally ivy in Kurdish due to how the plant grows together, supporting itself – explains that this underdevelopment is not an accident. “Since the founding of the Turkish Republic there has been a systematic impoverishment of the population. There was a policy of abandoning the area to leave it in a backwards state,” he says.

The stepping up of resistance in the 1990s resulted in the Turkish army forcefully evacuating 3,000,000 people, inevitably putting another great strain on the already struggling economy. 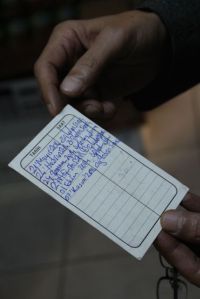 Families can visit once a month to collect food

Şerif shows us around a food bank set up by the organisation, explaining that most of the 4,500 families – 30,000 people – they provide food for are exactly those who were forced from their homes during the conflict. While the organisation would like to feed all the hungry people in the city, he explains that it focuses on those without a breadwinner – a male of working age.

“The breadwinner night be in prison, might have been killed, might be in the mountains, or might have just abandoned the family. But these are the people who need it most. We have thousands who apply but even if these families don’t have an income, we cannot give to them,” explains Şerif.

The charity was set up 2005 by civil-society and business groups. But it is now moving towards being wholly dependent on donations from people in the community. More than 9,000 people have now signed up to pay a monthly contribution, reducing the institutions’ contributions to just 18% of the budget. Remarkably this means that each donor supports three people.

“Our aim is solidarity between citizens. We want to fund ourselves wholly through donations, not through institutions. Citizens supporting citizens,” he says. 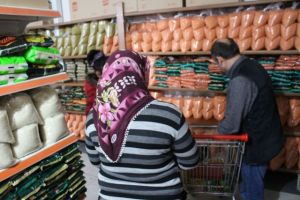 People are allocated a budget and choose food themselves

But getting people to overcome stigma is also a big issue for the food bank. “Often when people arrive they feel bad because they are asking for help and when they get something from us they will pray in thanks. But we say that while your prayers are very welcome, we’re not giving this to you as a donation, this is your right, and it is our duty to help you.

“We try to repair their psychologies. They come to us feeling oppressed but their poverty is not due to them being lazy. They didn’t cause their impoverishment, we try to get them to see things in this way.” 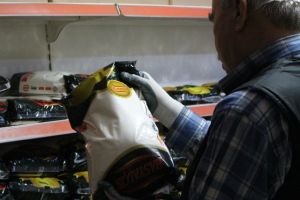 All the food provided is within its sell by date

Also, unlike food banks in the West, Sarmaşık does not provide people with out of date foods, but rather basic, nutritious food that it buys for the purpose. Again this is aimed at reducing the stigma attached to asking for help.

Şerif says that the support offered by the state to those in poverty is only appears sporadically around religious festivals, and rather cynically in the run up to elections.

As such, he explains, the community must step up: “We know that aid is not an effective way of dealing with poverty. However, something had to be done to help these people, as the Republic of Turkey has abandoned them to their fate.”

Patrick Smith is a journalist and is is Diyarbakir as part of a three-person delegation for Peace in Kurdistan Campaign. This delegation a similar delegation which took place last week. You can find out more here.