Several conference papers from last week’s EUTCC Conference, entitled The Kurdish Question in Turkey: Time to Renew the Dialogue and Resume Direct Negotiations, have been made available in English. The final resolution of the conference is also available, and you can download the opening speech by Kurdish MP Leyla Zana(pdf) and Dutch academic Joost Jongeden’s paper, Rethinking Politics and Democracy in the Middle East(pdf).

“Negotiating peace: Requirements for a political resolution and the Road Maps to Peace in Turkey”

Thank you very much chair for inviting me to speak to you today and to present the recommendations that the International Crisis Group has developed to alleviate the Kurdish problem and help the Kurdish movement and the Turkish government reach a political settlement.

Just a few words on Crisis Group. We were created in 1995 during the wars in the Western Balkans when several international policy makers felt that an organization that could give practical recommendations, based on field research, to alleviate and solve deadly conflict was needed. The head of our organization is Justice Louise Arbour, former UN High Commission on HR and Chief Prosecutor for the International Criminal Tribunals for the former Yugoslavia and for Rwanda. We work in about 65 conflicts around the work with some 150 staff. Our main advantage over other organizations is our field presence with about 30 offices around the world. Personally I cover the Europe program (the Balkans, Turkey and the Caucasus, North and South) and am based out of Istanbul, where I work with two other colleagues, Hugh Pope and Didem Akyel. Our only product is our reports – we don’t do any of our own activities, like organizing conferences or providing aid.

On the night of December 28th 2011, civilians from Şırnak’s (Şirnex) Uludere (Qileban) town’s Gülyazı (Bejuh) and Ortasu (Roboski) villages, having crossed over for ‘Cross Border Trade’, were returning from the Iraq border when they were bombarded with missiles fired from Turkish Armed Forces’ fighter jets, which filled the earth with 34 lives and our houses with sorrow! I am here today to make a presentation about this incident…

First of all I would like to speak to you a little about Roboski and Bejuh.

The Roboski and Bejuh of today were formed following the razing down of villages bound to Şirnak’s Uludere (Qileban) town by the Turkish state in the 90s; the people who were forced into exile from those villages moved in with their relatives in these two settlements. 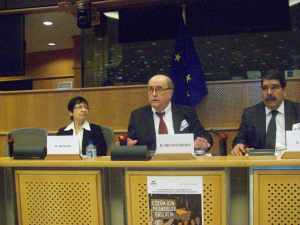 There are similarities and differences between the Arab and the Kurdish revolutions borne out by the very fact that in the Arab case we are talking about states while in the Kurdish case we are talking about a 30 m. non-state nation or put differently entities and communities in a state of political flux. In both the Arab and Kurdish cases the breaking of barrier of fear played an important role in the development of the movements, in both cases popular power has had a crucial role in leading it and in both the new media contributed immensely to its success. Likewise as in the Arab world among the Kurds too there is a new generation which may be called the upright generation, namely a generation that has regained the Kurdish voice, attained visibility in the international arena and is devoted to the Kurdish cause. Certainly the Kurdish awakening was inspired in some parts of Kurdistan by the Arab one, however, practically speaking it took completely different directions.

Mr Zubeyir Aydar, Member of the Executive Board of the Kurdistan National Congress (KNK)

Since the negotiation process for Turkey’s membership of the European Union has started, EUTCC has been regularly performing the series of international conferences on “EU, Turkey and Kurds”.  It is crucial from the perspective of a civilian where they could follow-up the relations between the EU and Turkey and this is an important initiative that should be appreciated. The main theme of the 9th conference being peace negotiations in Kurdish question would definitely contribute to the resolution of the problem.  I would like to thank to the EUTCC and to all others for their valuable work and wish them success.

A democratic constitution in Turkey can be an important step in resolution of many social-political problems in democratic ways.

A civil constitution might still create a positive psychological impact on the individuals in Turkey, in a country that is administered with a military coup constitution for many years.

With a new constitution, an opportunity to get rid of many constitutional clauses, that are being obstacles to a democratic progress for so long, will be created.